Jemahl Evans holds a Masters in Medieval History and has been a teacher and lecturer for nearly twenty years. He is the author of the acclaimed Blandford Candy series of novels set during the English Civil War and Restoration and published by Sharpe Books. 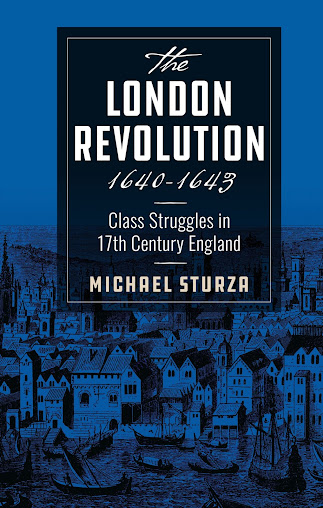 It is over thirty years since I sat in a cold lecture hall as a schoolboy, and listened to Christopher Hill deliver a lecture on the English Revolution as a guest speaker. Despite Hill’s stellar reputation, Marxism was unsurprisingly frowned upon as an ideology at my small public school (public schools are very old private schools in the UK for any international readers), an attitude I was acutely aware of as a scholarship boy from a coal mining family during the Miners Strike. It was the mid 1980s and greed was good; Marx was out and Hayek was in. The currents of historical thought were drifting away from the grand old man as Reganomics shattered the post-war settlement in the UK and US.

Michael Sturza’s The London Revolution, 1640-43: Class Struggles in Seventeenth Century England, seeks to redress that right-wing revisionism of the 70s and 80s, and emphasise the English Revolution’s roots in the artisan, bourgeoisie, classes that forced a conflict with the fading feudal state. Sturza targets the post-1960s revisionists with a laser-like focus and is caustic in his mostly valid criticism. The early chapters give a well written outline of the background to the conflict and the short and long-term sociological changes that sparked the revolution, whilst addressing the emergence of Marxist thought in historiography in post-WW2 academia, its failings, and the revisionism that followed.

The central premise that the revolution was driven from below, particularly in London, by artisans, tradesmen, and apprentices, allied with the puritan movement, is intriguing but not wholly convincing and certainly not new. Whilst I found little to disagree with in the analysis, there was a feeling that Pym and Hampden were being reduced to a Kerensky or Lafayette, and the agency of the House of Commons a mere sideshow compared to the power of macro-historical processes. The crossover between the Commons and the Puritan movement meant that the early leaders of the revolution in Westminster were very much a part of the revolutionary discourse. This is mostly downplayed, but not ignored by Sturza, in favour of class conflict as the prime mover in London.

Sturza’s work obviously owes a great deal to Christopher Hill et al, but this is not a mere rehashing of Hill’s ideas and conclusions. It is very much a modern study and Hill’s own political positions in the cold war divisions are addressed and challenged as well as the right-wing revisionists. Sturza does not shy away from smashing the idols of left wing history in his polemic. He lays out a coherent and articulate reassertion of an English Revolution driven by class conflict, caused by the rise of capital in a failing feudal system. London is recognised as the engine of the revolution, and the difference in social and political development, particularly after the reformation, well demonstrated.

Nevertheless, it is the conservative histories and right wing historians that are Sturza’s main target. In a sense, he perhaps goes too far here. The limitations of a purely right wing approach to the period were apparent even at the height of ‘end of history’ political revisionism and the triumph of neoliberal orthodoxy. However, there were still valid insights about the personal and individual, and as Sturza acknowledges, in local research that all builds our understanding of the period.

By the end I was struck most by E.H Carr’s assertion that we as historians, and our histories, are products of our own times as much as constructs of the past. Sturza’s work, whilst relying heavily on the research of the 1960s marxists, is part of the 2008 post financial crash environment, and fits with a growing trend of reappraising left wing historiography since that shock to the modern capitalist system. The London Revolution sits comfortably alongside works like Pickety’s Capital in the 21st Century in that respect, although much less voluminous. This in itself is no surprise, as the neoliberal orthodoxy crumbled after 2008, genuine reappraisals of left wing ideas in history, economics, and sociology were inevitable and welcome.

Sturza’s The London Revolution, 1640-43: Class Struggles in Seventeenth Century England is available from the Mad Duck Coalition. It is vital reading for any student of the period, giving a valid and often overlooked approach a fresh perspective that is both interesting and challenging, but also accessible enough to anyone with a general interest in the period.

Popular posts from this blog

Ælfgifu: Harlot, or Royal Threat? A Guest-Post by Annie Whitehead 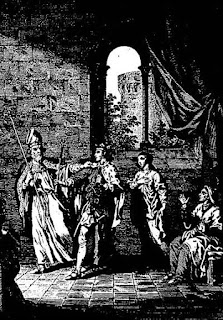 Ælfgifu: Harlot, or Royal Threat? Annie Whitehead Annie is a history graduate and an elected member of the Royal Historical Society. She is the author of fiction and nonfiction, with a special interest in Mercian history. She has written four award-winning novels set in Anglo-Saxon Mercia, one of which,  To Be A Queen , tells the story of Æthelflæd, Lady of the Mercians. She has contributed to fiction and nonfiction anthologies and written for various magazines. She is on the EHFA (English Historical Fiction Authors) editorial team and is senior reviewer at Discovering Diamonds. She was the winner of the inaugural Historical Writers’ Association/Dorothy Dunnett Prize 2017 and is now a judge for that same competition. She has also been a judge for the HNS (Historical Novel Society) Short Story Competition. Her nonfiction books are published by Amberley Books ( Mercia: The Rise and Fall of a Kingdom ) and Pen & Sword Books ( Women of Power in Anglo-Saxon England ). Website:  https
Read more

Harold I “Harefoot” of England: A Reassessment by Brandon M. Bender

Harold I “Harefoot” of England: A Reassessment Brandon M. Bender Brandon M. Bender is a writer whose recent work focuses on medieval English history, with an emphasis on the Danish Conquest of England and the wider pre-Norman era. His peer reviewed work can be found in The Year’s Work in Medievalism Volume 34 and Rounded Globe. Brandon’s writing has also appeared in Camedieval – a publication affiliated with the CALM and GEMS programs at Cambridge University – and Lancaster University’s Epoch History Magazine. Brandon’s first book, England’s Unlikely Commander: The Military Career of Æthelred the Unready, debuted in 2019 and was the subject of the Rex Factor episode “Æthelred the Ready.” Brandon has also written about US history. He lives in the Kansas City metropolitan area. Although it is rarely remembered today, eleventh-century England was ruled by four kings from the House of Denmark: Swein Forkbeard, Cnut the Great, Harold I, and Harthacnut. The third king in that list, if he
Read more

Presidential Strategies in Conflict: Refugee Policies During the Vietnam War, 1953-1974 Ethan Healey Ethan Healey is a B.A. History Student at New England College in Henniker, New Hampshire where he will be graduating this upcoming May. He is currently writing a thesis about Founding Father John Adams during his retirement and why the Early American press made him retire after a nearly thirty year career in politics. Ethan's historical interests are primarily in Early America and the Atlantic World, while also researching presidential politics throughout the centuries. He hopes to be in Graduate School next Autumn. Ethan Healey currently lives in New Hampshire with his partner and Criminal Justice student, Keyanna Matos. The United States Presidency is one of the most established offices in the world. Different presidents deal with different issues according to their time period. During the Cold War, there were many issues spanning across many presidents of different ph
Read more